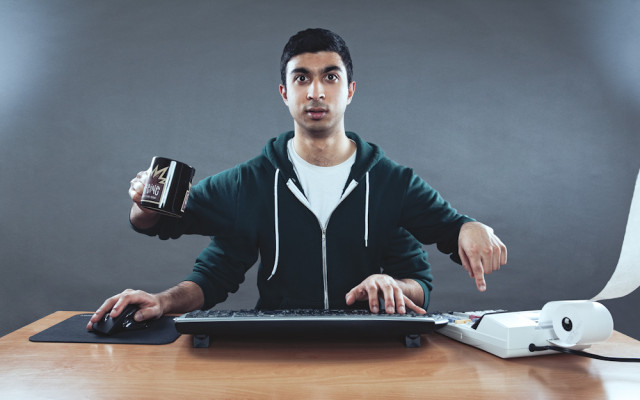 How Multitasking Is Making You Less Productive

The phone’s ringing, you’re halfway through an email and your colleague is asking you an urgent question. The most productive worker should be able to handle all these things at once, right? Well, not necessarily…

Recent research suggests that multitaskers are less productive, lack concentration and even suffer long term damage as a result of frequent multitasking. Let’s take a look at the facts…

Etienne Koechlin and Sylvain Charron of the French biomedical research agency INSERM asked participants to perform a complicated letter-matching exercise. Participants were shown 2 words and required to multitask by determining whether 2 successive letters appeared in the same order on a screen as they do in the word, dealing with uppercase and lowercase letters at the same time.

This research suggests that while the brain can effectively handle 2 tasks at once, it can’t handle more as only 2 hemispheres are available. When the researchers threw another task into the mix, participants kept forgetting to do one of the tasks and made three times as many mistakes as they did while dual-tasking.

Takeaway: Try not to get stuck into more than 2 tasks at a time

Dr Clifford Nass (a Stanford researcher famous for his work on multitasking) asked people who never multitasked (non-multitaskers) and people who always multitasked (chronic multitaskers) to complete a test that involved switching between tasks, filtering information and using their working (short-term) memory.

Somewhat surprisingly, chronic multitaskers were awful at all the tasks (much worse than non-multitaskers), even the ones that didn’t require multitasking!

Takeaway: Cut down on multitasking, your brain will thank you for it in the long run!

You Only Think You’re Being More Productive

In an interview for NPR, Dr Clifford Nass explained that participants in his experiments on multitasking consistently thought they were being incredibly productive, whereas in reality, they were constantly being outperformed by non-multitaskers.

“We – the people we talk with continually said, look, when I really have to concentrate, I turn off everything and I am laser-focused. And unfortunately, they’ve developed habits of mind that make it impossible for them to be laser-focused. They’re suckers for irrelevancy. They just can’t keep on task.” – Dr Clifford Nass

Takeaway: Try monotasking for 1-2 weeks and measure how much work you really get done. You may find that multitasking was slowing you down afterall!

How do you manage your multitasking? Share your experiences in the comments below.